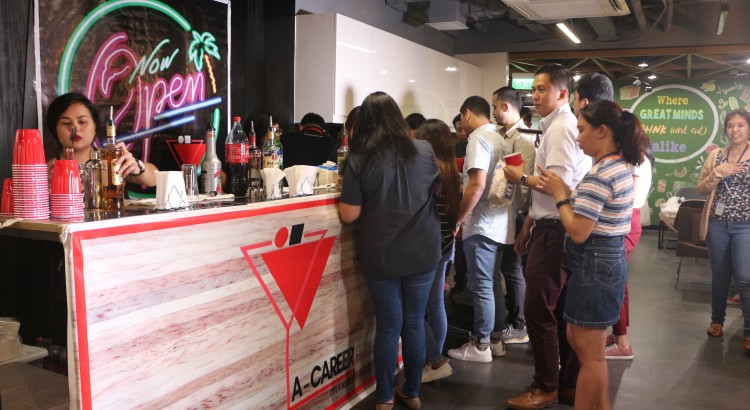 As one of the newest A-Clubs, the A-Career Mixers is ready to bring a myriad of flavors for the events held in Aboitiz. This progressive group of skilled mixers aims to foster work-life integration through a shared interest in mixology while raising funds for various causes.

The ‘formulation’ of this club began in early 2019 by its president, Burn de Guzman who shared that the name ‘A-Career Mixers’ was inspired by an experience he had in the US.

I attended a session called ‘Career Mixer’. [The whole time I had thought] it was about application, you submit your resumé. When I got there, I realized it was a networking session. It’s a group of people coming from different companies, like Boeing, Amazon, and Microsoft. So they are there to network. Different function, different careers.

The current name of the A-Club, however, relates to ‘mixing’ of both drinks and people, which naturally comes with drinks. Soon after, interest in joining the club grew among A-People.

To better equip the new members, club member Jamie Buenaventura invited a group of mixologists to teach the A-Career Mixers how to make cocktails the way professionals do, both refined and complex. Their menu includes cocktails you can order at any bar but the star of the show would have to be their signature drink made especially for A-People, the CosmoBoitiz. Other favorites are the Gayuma and Red Sangria.

Beyond the drinks, the A-Career Mixers are a family just like the other A-Clubs in the company. New hires and members of the clubs have something to share about their experiences:

The A-Career Mixers helped me integrate myself easily into the Aboitiz family as it extended my network outside of my department and BUs.

You break barriers. That’s the goal of A-Club, to break barriers, to have cross functional teams and individuals, and to promote teamwork. This kind of group is formed because you have interests that you share.

For its opening year, Burn has one thing in mind, “It’s teamwork. It makes the event successful because if there’s no teamwork, we would not get anywhere”. With the joint effort of the members of A-Career Mixers, the club believes that they will be able to grow patiently with each other. This new club has given the A-People an opportunity to develop their interests and values.

Recently, the A-Career Mixers were asked to mix drinks for 5thirsty, a social event organized by AboitizPower, and Trivia Night 2019, a fundraising event wherein the business units compete against each other for the highest number of points. Every bit of income the A-Career Mixers earn is donated to the charitable efforts.

Watch out for this skillful group for new mixes up their sleeve as they join the upcoming Aboitiz events this year!

Interested to join A-Career Mixers? You may get in touch with Burn De Guzman or Jana Buenaventura.