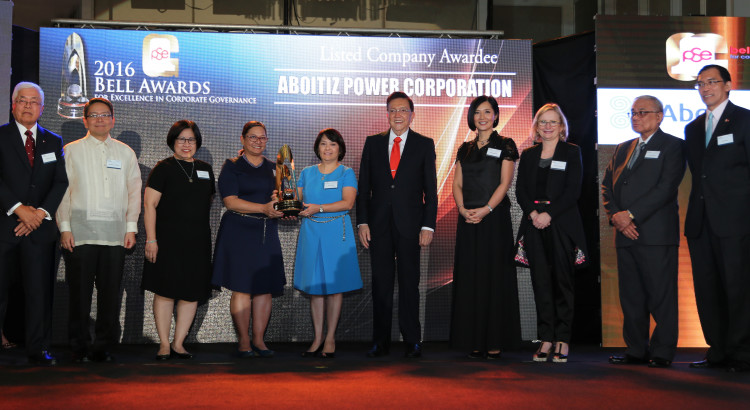 AboitizPower is committed to good governance, convinced that it is the sensible, appropriate, and only sustainable way to move forward as a business enterprise. Good corporate governance practices create value for the company and its businesses.
– Antonio R. Moraza, President and COO, AboitizPower

AboitizPower and Aboitiz Equity Ventures were among the publicly listed companies honored at the 4th Annual Bell Awards, which were handed out by the Philippine Stock Exchange last November 10 in ceremonies held at the Makati Diamond Residences.

For demonstrating exemplary performance in good corporate governance, AboitizPower received its second Bell Award after its first win in 2014 while AEV, which won in 2013 and 2015, was among the finalists of 2016. 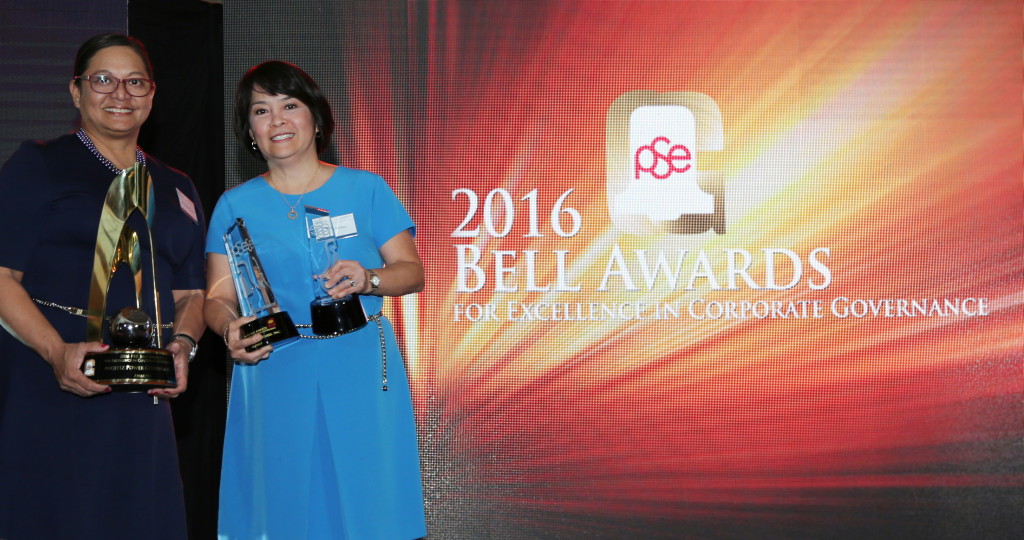 The PSE Bell Awards aims to help address the need for better transparency, investor protection, and corporate social responsibility among participants in the Philippine capital market by recognizing listed companies and securities firms that adhere to outstanding corporate governance principles and practices. An independent panel of judges, composed of industry experts and advocates, select the finalists and awardees. There were 10 listed companies shortlisted from which 5 were chosen as winners. 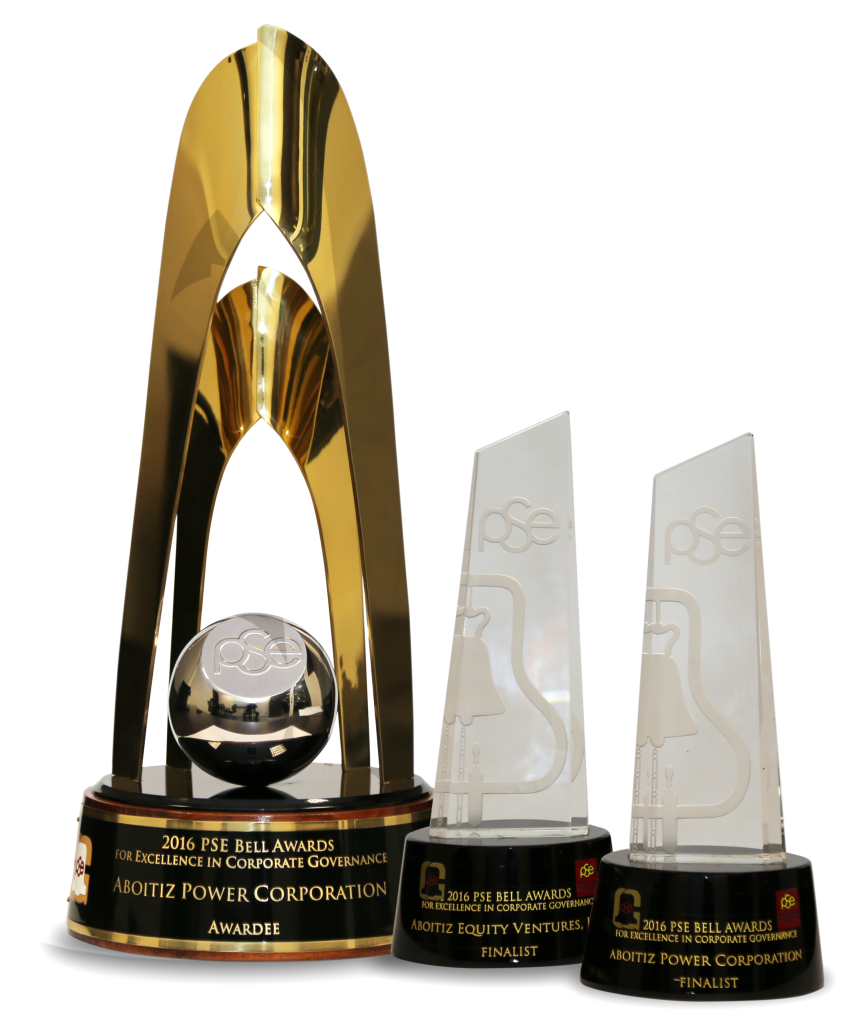 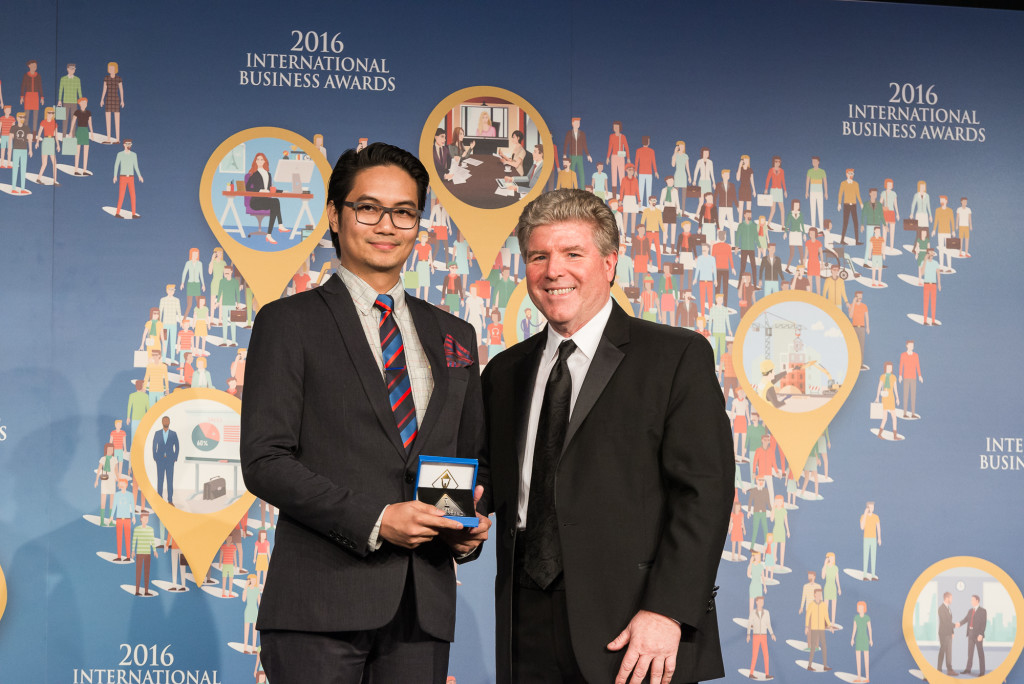 It’s a double win for WeatherPhilippines Foundation and Aboitiz Equity Ventures at the 2016 ASEAN Corporate Sustainability Summit and Awards. WeatherPhilippines bagged the top award in the Product and Service Innovation category while AEV garnered First Runner Up in the Resource Efficiency category. This is the fourth prestigious award received by WeatherPhilippines from an international award-giving body since 2014.

The ASEAN Corporate Sustainability Summit Awards program aims to support organizations in the process of evaluating their sustainability strategy, performance, and goals. It also aims to inspire comprehensive exchange of ideas and best practices in Sustainability in the ASEAN region to identify field models for Sustainability Excellence.

Excellence in banking has once again been claimed by UnionBank of the Philippines and its leaders with big wins at the 6th Asian Excellence Recognition Awards 2016. The Bank was honored with the Best Investor Relations Company Award. It has been a consistent awardee since 2014. Chairman and CEO Dr. Justo A. Ortiz, on the other hand, was named Asia’s Best CEO in arena of Investor Relations.

The Corporate Governance Asia Awards recognize excellence in financial performance, investor relations and communications, business ethics, corporate social responsibility (CSR) and environmental practices. The scores used to determine the winners come from the data that was submitted by its readers as well as from investors. Executive Vice President and Head of Center for Strategic Partnerships Genaro V. Lapez (left) received the award on behalf of the Bank and Dr. Ortiz at the ceremony held at the JW Marriott Hotel in Hong Kong last June 17.

SN Aboitiz Power-Benguet (SNAP-Benguet) received three awards in the Department of Labor and Employment’s 10th Gawad Kaligtasan at Kalusugan (GKK) on June 28 in the DOLE-CAR office in Baguio City. SNAP-Benguet was selected GKK Regional Winner under the industrial category by the regional selection committee for its outstanding contributions in the area of occupational safety and health (OSH), including compliance to general labor and OSH standards. SHESQ Sr. Manager Hollis Fernandez was also awarded as the 10th GKK Regional Winner under the individual category. Photo above shows the SNAP-Benguet SHESQ team with officers from DOLE-CAR, including regional director Nathaniel Lacambra (second from right) and OSHC Executive Director Ma. Teresita Cucueco, MD (3rd from left).