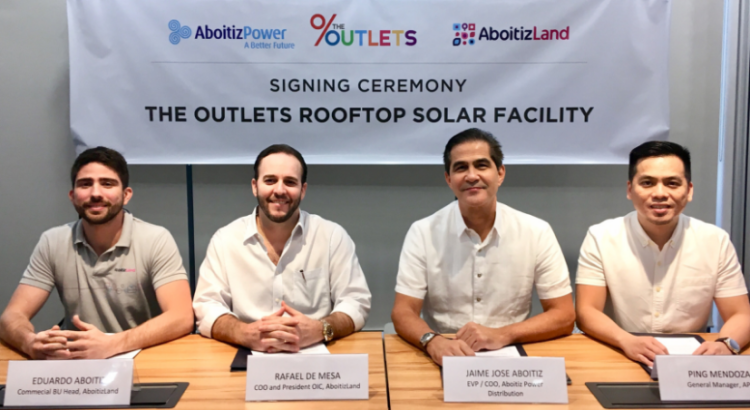 True to its promise of advancing business and communities, AboitizLand and Aboitiz Power Distributed Energy Inc. (APX) signed a memorandum of agreement for the installation of a 1.5-megawatt peak (MW) rooftop solar project in The Outlets at Lipa.

With the project, APX will operate and maintain the solar panels on behalf of AboitizLand’s zone development firm, Lima Land Inc, at a per kilowatt-hour rate that is currently lower than the grid. Electricity produced is estimated to offset 31,000 tons of carbon dioxide per year which is equivalent to planting about 1.4 million trees.
AboitizPower first entered the solar power market in 2016 with its 59-megawatt peak San Carlos Sun (Sacasun) project in San Carlos City, Negros Occidental. APX, its newly-formed business unit, began operating the 100-kilowatt installation on top of the Aboitiz and Co. office in Cebu City in March and has since been delivering clean and renewable energy to building tenants like ACO, AboitizPower, AboitizLand, and Pilmico, among others.
Also present during the signing ceremony were Aboitiz Power Distribution Utilities EVP and COO Jim Aboitiz, AboitizLand Commercial BU Head Dudes Aboitiz, and APX General Manager Ping Mendoza.
In its effort to advance its business and communities, AboitizLand continues to curate carefully designed communities like The Outlets at Lipa, that help promote environmental sustainability.
A 90-minute drive from Manila, The Outlets at Lipa is a 9.3-hectare property located inside the Lima Land estate. It features family-friendly open spaces with wide pathways, alongside an extensive variety of restaurants and food stops, positioning this shopping destination as one of AboitizLand’s biggest commercial developments.