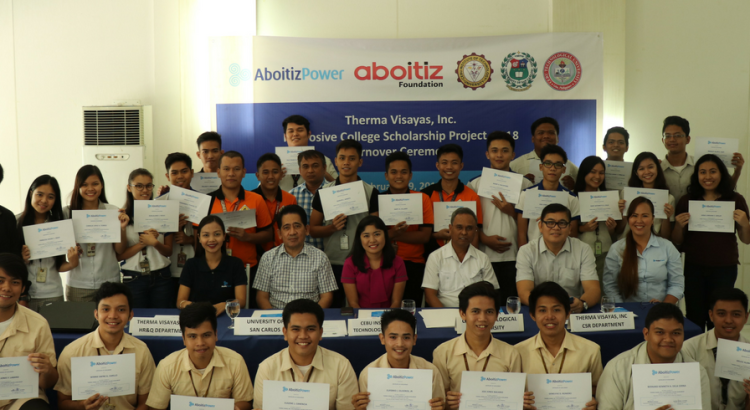 ​PROUD SCHOLARS. TVI's student beneficiaries display their certificates of scholarship during a turnover ceremony in Cebu City on February 19, 2018.

When Junie Valendez decided he wanted to pursue engineering in college, even his family did not think he was serious.

His father, a carpenter, and his mother, a housewife, were grounded by reality. With four other children to take care of, they just didn’t have enough financial resources to support Junie’s dream. But instead of becoming resigned to his circumstances, Junie drew motivation from his position in life.

Junie, a native of Medellin town in northern Cebu, decided to quit high school after his sophomore year to find work in Cebu City and hopefully provide for his family through his earnings. After two years of manning a relative’s barbecue stall in downtown Cebu City, he realized it wasn’t enough. That was when he understood he needed to go back to his hometown and finish school.

For two years, Junie juggled his studies and work—helping out his electrician uncle as they went from house to house in their neighborhood after classes, installing electrical wires or even as simple as fixing busted lights. During weekends, he would assist his father with carpentry work.

These experiences were the spark that ignited his dream of becoming an engineer, pushing him to become better than who he was in the past.

“Nobody believed I would be where I am now. During my first and second years in high school, I never took my studies seriously. I used to cut classes because I was always out looking for money,” shared Junie, now 24 years old.

He was elected student council president of his high school during his senior year and eventually graduated class valedictorian, in spite of having to manage his time between academics and his jobs. Yet, there were still some who thought he didn’t have what it takes to finish college.

“Do you even think you can finish? Your parents don’t have money. I bet you won’t even make it past second year,” Junie said, recalling what a relative once told him then.

Junie could have retorted, but instead, he remembered having humbly said, “I will have to see, tiyo (uncle). We can never tell what the future holds.”

Some time in March this year, he would have already completed his fourth year studying electrical engineering at the Cebu Technological University (CTU) in Cebu City. He will then have only one more year before he graduates and eventually takes the licensure exam for electrical engineers.

Through it all, his parents have not spent a single centavo for his studies, which he understood, given their situation. He was determined to get his degree, pass the board exam, and work to give his family the life he was never able to have as a child.

Since 2016, Junie has been accepting project-based work from a local construction firm to help cover transportation costs and other day-to-day expenses.

Junie was also among the ten engineering students from CTU chosen by Therma Visayas (TVI) to be part of its college scholarship program, which began in 2016 and will run until 2019.

At the onset of the project, TVI only tapped University of San Carlos (USC) and Cebu Institute of Technology-University (CIT-U) for beneficiaries, originally comprising 20 fourth year and fifth year students in mechanical and electrical engineering. Eight out of these 20 students already graduated and passed the engineering board exams last year.

In 2017, TVI recruited 20 new scholars and expanded the project to CTU in a bid to help more financially challenged but deserving students in Cebu, with the plan to eventually hire them for the operation of its 340-Megawatt thermal power plant in Toledo City.

With an additional 10 student beneficiaries from CTU, TVI now has a total of 32 scholars in its pool.

It has always been my dream to complete this course. I thank God I was given this opportunity through TVI. There is a huge possibility God will allow me to finish. I just didn’t expect all these blessings that would come.

Dr. Edgar Ambos, dean of the CTU College of Engineering, said as if having been chosen by AboitizPower as a beneficiary wasn’t enough, his students were included in the same pool of scholars as those from prestigious institutions such as USC and CIT-U.

“We have high regard for these schools, which are considered to be one of the oldest schools offering engineering. We consider ourselves a baby, but we are trying our best. I think we have already established a name for CTU and we are still improving, we are a work in progress,” he said.

The project was made possible through a partnership with the Aboitiz Foundation, the corporate foundation of the Aboitiz Group.

Edgardo Nicolas, TVI corporate social responsibility and government relations manager, said they would continue to support the remaining scholars until their board exams.

He shared to the scholars AboitizPower’s values of integrity, teamwork, innovation, and responsibility, stressing that they should learn to adopt these principles as early as now in preparation for the future.