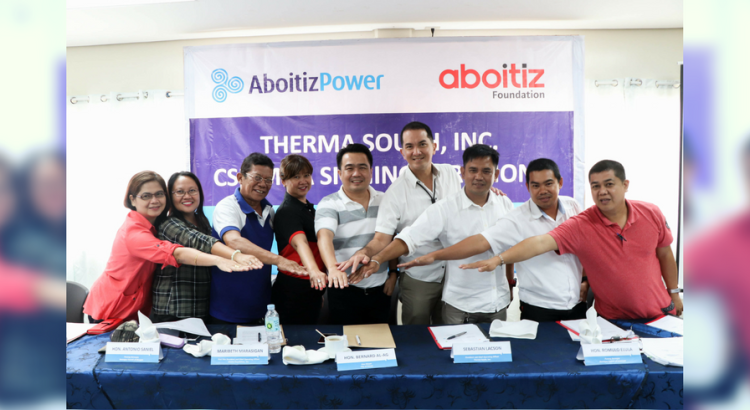 The project partners and beneficiaries inked their respective Memoranda of Agreement (MOA) during a one-time signing ceremony last April 18, 2018, which was attended by representatives of various sectors including Davao City Vice Mayor Bernard Al-ag, Aboitiz executives, barangay, officials, and the Department of Education.

With support from the Aboitiz Foundation, the CSR projects slated for the year include the fly ash brick project that will recycle the thermal power plant’s ash byproduct and the community’s plastic waste into eco-bricks and pervious pavers.

Also included are the refurbishment of the Binugao Health Center, support to the community’s Bantay Dagat team, a medical mission, the donation of a science laboratory to Inawayan National High School, and the continuation of TSI’s purposive college scholarship program, among others.

TSI has already donated around P43 million worth of CSR projects since 2010 to its host communities in Barangay Binugao in Toril, Davao City and Barangay Inawayan in Sta. Cruz, Davao del Sur, 71 percent of which was focused on education.

“Back in 2010, we made the right decision to approve the proposal to build a coal-fired power plant here in Binugao because we trust the Aboitiz company. You helped our communities, even though it wasn’t a requirement. Davao is a progressive city because of our good relationship. With 9.5 percent economic growth, the highest in the whole Philippines, Davao City achieved this because of our partnership with AboitizPower,” said Vice Mayor Bernard Al-ag, who witnessed the ceremony on behalf of the Davao City government.

Both TSI’s host communities, barangays Binugao and Inawayan, have seen rapid progress in their areas since the start of TSI’s operations. Most notably, the income that both barangays collect from taxes has more than tripled because of the plant.

“I can attest that Binugao has become progressive because of Therma South. Why? Back in 2012, we only had P2 million in barangay revenues. Now, we have P21 million considerably because of TSI,” said Binugao Punong Barangay Antonio Saniel.

“Much of what has been done here is really because of how TSI’s management takes cares of the plant and its communities. These are the people who truly strive to drive change for a better world,” shared TSI President and Chief Operating Officer Sebastian Lacson.