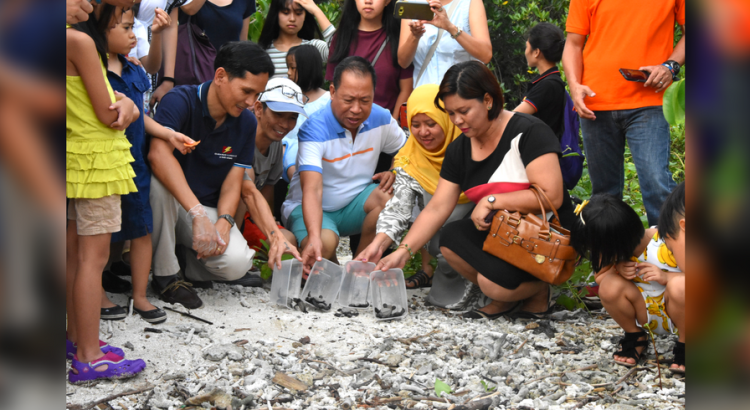 Davao Light, its partners, and host communities took time off from their schedules to help these newly hatched pawikans get back to their home.

On March 28, 2018, just before the Holy Week break, 76 pawikan hatchlings were released back to the sea by Davao Light and Power Company (DLPC) at the Aboitiz Cleanergy Park in Punta Dumalag, Davao City.

Pawikan eggs are known to be fragile, and disturbance from people and other animals may affect the development of these endangered Olive Ridley sea turtles. Before everyone headed to the beach as part of the lenten tradition, DLPC and its partners made sure the turtles were already in their natural home, their safe haven.

The pawikan eggs were originally found at the shoreline of a public beach in a nearby barangay, 76-A, before it was transferred to the Cleanergy park on February 21, 2018 with the permission and cooperation of the Department of Environment and Natural Resources.

DLPC’s community relations manager Fermin Edillon said the continued support and coordination of the communities really helped in the biodiversity conservation efforts of the Cleanergy park.

It is wonderful to have the involvement of the nearby barangay as they are truly our great partners of the Cleanergy park’s initiatives. With the community’s awareness and cooperation,we can save more of these endangered species.

The Cleanergy Park, a partnership project of Davao Light and the Aboitiz Foundation, is an Aboitiz Better World initiative that models an urban-based habitat conservation and biodiversity management.

In addition to being a turtle sanctuary, it has become a bird sanctuary with more than 70 discovered species, a haven for different species of trees, fish thriving in its mangrove forest, a fish sanctuary, seagrass beds and coral reefs.