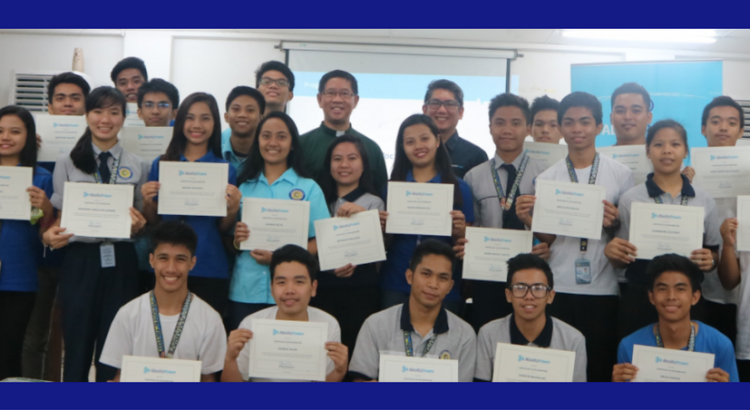 The day they were officially confirmed as Aboitiz scholars was also the day when Jimbo Managat and Charvee Muchillas realized that their lives were about to change for the better. But more than changing their lives, they will later experience how this once-in-a-lifetime opportunity would slowly transform them to become the person they never thought they could be: confident, skilled, and capable of achieving their dreams.

Eventually, Jimbo’s brother graduated from the technical vocational (tech-voc) program and was hired by a big company. Earning enough now to support their family, his younger brother convinced him to go back to school and promised that he will pay back what Jimbo had sacrificed for him. Seeing how education has given his brother a better life, Jimbo said yes, even if it meant resigning from his 5-year job as a merchandiser.

Just like Jimbo, Charvee, 19 years old, is also the eldest in the brood of three. For two years after graduating from high school, he was helping his family by working as a fish vendor for the small amount of PHP50 per day.  He also took a job as a caretaker of a resort in Laguna. He has dreams – big dreams like becoming a computer engineer someday, but the income his father, a personal driver, is earning could not send him to college.

So when his aunt told him about a technical-vocational scholarship AP Renewables (APRI) – MakBan, an AboitizPower wholly owned subsidiary, is providing to deserving young people of its host communities and that he is eligible to apply for it, Charvee did not think twice. He seized the opportunity, determined to make it work. Indeed, the thought that he may not be able to keep up with his classmates if he gets accepted peered into him. But he did not let doubt and insecurity overpower him; his dreams were far stronger.

Currently, the two are specializing in Mechatronics at the Don Bosco Colleges in Canlubang. Along with 27 APRI scholars, they are being molded to become enthusiastic experts in their chosen fields.

Asked what’s waiting for them after their 20-month program, both expressed an even bigger dream of taking further studies while working to help their families.

Education remains at the forefront of APRI’s corporate social responsibility programs and is part of its commitment to advancing business and communities.

Better Lives for Farmers from the Land of Dreamweavers