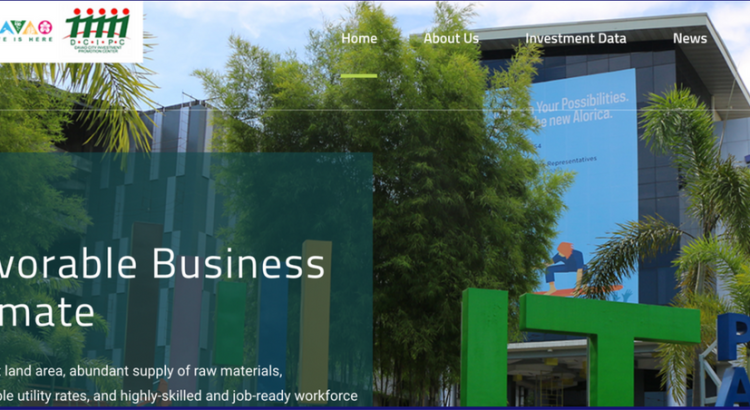 The City government of Davao and the Davao Light and Power Co. Inc. have long been partners in the aim of driving a robust economy for the city.

With the business opportunities present in Davao, namely in Infrastructure and Connectivity, Tourism, Manufacturing, and Agriculture, it is indeed the best time to invest.

This newly redesigned website adheres to Global Investment Promotions Best Practices of providing information and relevant content through the internet to local and foreign investors. Built from the ground-up, the website is search engine optimized, and aims to provide quick and easy access to essential information about Davao City, such as socioeconomic data, news and investor guides. Interested parties may also contact the DCIPC directly through the Contact Us page.

The new website also has an improved look and feel but at the same time has maintained the Davao City’s brand, Davao: Life is here.

The team of the DCIPC has the full administration of the website being the lead agency in promoting Davao as a viable investment site.

“Davao Light is truly honored to be given this opportunity to help Davao City be known in the Business Community, both local and global, that it is the #1 investment destination. We will continue to be part of the city’s rapid urbanization. This endeavor is not only of Davao Light but of the entire Aboitiz’s goal of advancing business and communities.”

The investment promotion website continues the stronger collaboration between the Davao City local government and Davao Light for decades. Back in 1996, the company partnered with the local government in the implementation of the street lighting program in Davao City. This helped enhanced tourism making by making Davao one of the best-lit cities in the country.

The Central 911 was also put up in September 2002 from the idea brought about by both former Davao Light President, the late Alfonso Y. Aboitiz, and President Rodrigo R. Duterte, who was then Davao City Mayor. It was created to respond to emergencies and at the same time help curb criminality.

Clear with its purpose, Davao Light, together with the Aboitiz Group, will continue to drive change for a better world by building meaningful partnerships and aiding the local government to provide better services to its constituents.