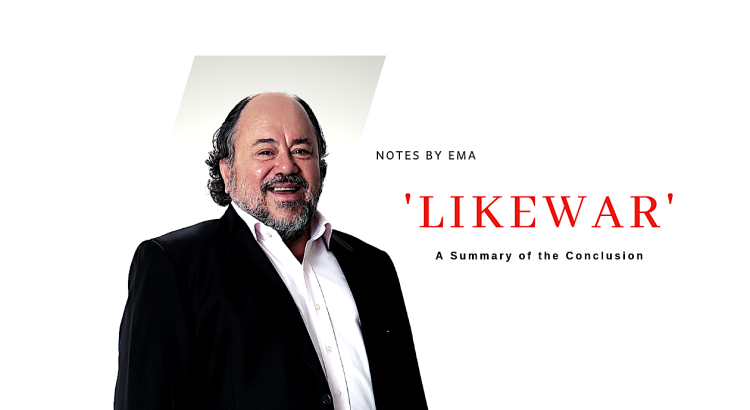 LikeWar is a book written by P. W. Singer and Emerson T. Brooking. It is about the “weaponization of social media”. I have taken pieces from the book for your convenience.

I am sure that most of us are familiar in some form or another with social media. When we were going up, we called it gossip. Grandmothers showed photos of their grandchildren to other grandmothers, trip photos were exchanged. Human nature evolves very slowly as the expressions of human nature grow at a geometric pace. But gossip is gossip and society has developed this medium of communication to control behavior. (Don’t be afraid of being unique — it’s like being afraid of your best self!)

This is a book that must be read even by those of you who are young and have been born with Facebook and Twitter. The unintended consequences of these products go beyond what we can see today.

Like all technology, it is used to move the world forward and enhance the human condition. It is also used to deter the improvement of the human condition. So far, history tells us that the former eventually win even though, at some points in time, it seems that we are on the rewind button.

#AllEyesOnIsis created a following that recruited by appearing on the screens of multitudes as invisible bombardment sowing terror and all kinds of adverse reactions from those ready to receive and those that countered it. At one point, they were recruiting bodies and minds with 70,000 Twitter accounts. Social media has been weaponized.

There are four billion souls on the internet ecosystem today.

The Chinese invented the movable type which is at the heart of the printing press technology — 80,000 characters proved it to be impractical. When Gutenberg began its use in 1438, printing was born. Monks and scribes had honed their hand-copying skills, so they called for rulers to ban this new technology.

Now that was to titillate you. The purpose of this paper is to summarise the rules of LikeWar and encourage you all to read it. 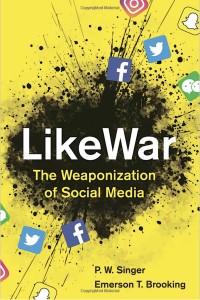 This is a book that must be read even by those of you that are young and have been born with Facebook and Twitter. The unintended consequences of these products go beyond what we can see today.

1. There is a sense of flux, but the modern information environment is becoming stable. The internet is the communications system of our planet among us human beings. There is no indication of this changing for some time even if the web grows in membership, in scope, and in size, which it inevitably will. The role of all members plays — and will play — a crucial role in public life.

2. The internet is a battlefield. It is a weapon for achieving the goals of the actor that manipulates it more effectively. The battle is continuous, it is contiguous, and the information it produces is contagious. The best and worse aspects of human nature will fight fairly and viciously over what matters online — your attention and your engagement.

3. This battlefield changes how we must think about information itself.  There is a digital record of everything, and it can appear anytime and into forever. It only carries value if people believe it happened, true or untrue, so created events can have power, and facts can be rendered irrelevant. In transparency, the truth can be obscured.

4. Politics and war have never been so intertwined. Politics has taken on elements of information warfare, while the duel for an online opinion influences a violent conflict.  The most minute decisions shape the battlefields of war and politics.

5. WE ARE ALL PART OF THE BATTLE

This state of affairs is not what was promised.

Social media forms the foundation of all aspects of everyday life. Governments are as ill-prepared as they are wasteful of the time they have to adapt.

Information literacy is no longer an educational issue, it is an issue of national security.  Our Philippine government does not even reach the level of being ill-prepared.

God only knows what it is doing to our children’s brains and their emotional composition.

It can be used well — to expand public awareness and access to programs, track needs, and gather ideas among other possibilities.

How will the social media companies react to stay relevant and yet prevent the dispersal of misinformation, brainwashing, manipulation, et. al.?  Can they maintain their being neutral platform providers?

The social media situation was that of automobile companies when they did not have seat belts, airbags, and emission controls.

Reality is one, though wise men speak it variously — Hindu Rigveda.