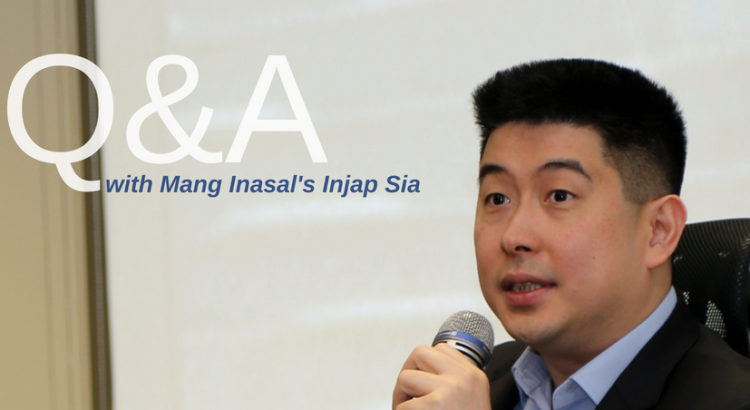 On May 17, Aboitiz team members sat down with Mang Inasal founder Injap Sia to know more about the story of his company.

Q: You graduated with a degree in Architecture. What made you jump to the Food industry?

At the time before Mang Inasal was founded, I tried to look for gaps in the market and matched it with the resources I had. In 2003, there were no barbecue fast food chains in the Philippines. I realized that the common denominator then was that all fast food chains were and still are comfort food for the general mass.

Q: There were so many other large companies before Mang Inasal was bought by JFC and you founded Double Dragon. How did you differentiate your execution and find the niche compared with your established competitors?

Often, ideas in larger corporate companies are parched by the committees that are in charge, in contrast to a situation where only one person initiates an idea and decides.

An example would be smart phones and the older models of cellphones. Steve Jobs had a good idea and he delivered value to customers. The more features a product can offer, albeit difficult at first to produce or use, far outweighs the ease of staying with the current trend.

When Mang Inasal’s marketing group was turned over to Jollibee, they set out to re-work our strategy. The first question was “What makes an ideal taste for inasal?” I disagreed with this. The point was that the recipe should be different from what competitors have. Sometimes, asking people when they do not know what they want, can be detrimental. I think surveys should be used to know current preferences, not to influence your decision.

Q: What were your failures and what have you learned from them?

Little things, or as I often call them “building blocks,” are OK. You can learn from these little mistakes. Big mistakes are better prevented through anticipation than later finding yourself unable to get back up from their devastating effects.

We had numerous small mistakes in the past. No decision has to be made, even if it’s fast, if you have not explored all the possibilities. That way, you minimize the mistakes to the little ones.

Q: When you started Mang Inasal, did you always have the Jollibee buyout in your business plan?

From the start, growing the business is really part of the vision. But how the business will turn out was not something that was there from day 1.

If getting acquired had always been in the equation, then leaders will think and decide differently.

Q: How was the culture integration between Mang Inasal and Jollibee like? What was the process when Jollibee and Mang Inasal combined and their cultures merged?

I anticipated that it wouldn’t be an easy integration. I became the gatekeeper. I had to step in and intervene in a number of instances. In most cases, I had to find reasons and things that made sense to convince people.

Corporates would want to fix things immediately as soon as they step in. But the acquired business may not be ready. It has to be staggered and properly paced. I agreed with things that needed to be done immediately, but disagreed with others that would kill the business if introduced far too quickly.

Q: How did you handle the leadership shift from having one store to having a couple of hundred?

The shift had to happen according to the growth of the company. If leaders cannot adjust, that would be a problem. How you adjust and calibrate is very important. It’s more a feel, thus more of an art than a science. It cannot be templated.

Q: Could you describe your leadership style?

My leadership style differs, depending on many factors and the stage where the company is. From dictatorship to democracy. Companies should be treated like a human: when it’s young, you’re very hands-on and do everything for it; but when it grows, you have to relinquish more control.

Q: How did you keep yourself open to change? Was it a natural trait or was it a conscious decision that you had to make?

It’s really in my personality. If you have to go from A to Z, it isn’t a straight line. There will be so many disruptions and changes, and you have to be open to learning new things.

This insight and experience exchange with Mr. Injap Sia is part of the Leadership Talks series of the General Management Development Cluster, which is composed of A-talents Groupwide. These functional development clusters are being managed by the AGHR Talent Optimization Team and their respective Executive Sponsors.