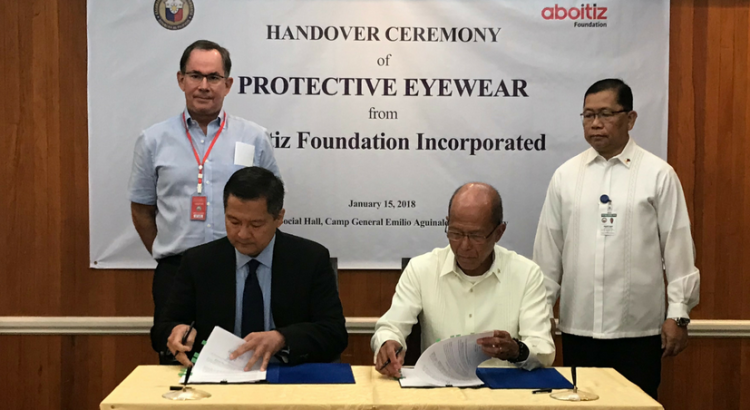 What started as a casual conversation led to a life-saving project for our soldiers.

Aboitiz Equity Ventures Executive Vice President and Chief Operating Officer Sabin Aboitiz was having lunch with Defense Secretary Delfin Lorenzana late last year when the latter shared a sad story of how a couple of soldiers fighting against the Maute terrorist group lost their eyesight when they were hit by bomb explosives.

What’s most unfortunate about it is that such tragedy could well have been avoided if only they had protective eyewear. Upon hearing the story, the Aboitiz Group readily bought thousands of high-qualtiy protective eyewear for the troops.

“I guess sometimes we take it for granted that these glasses make such a huge difference to the soldiers.  We in the Aboitiz group appreciate very, very much the sacrifices made by our soldiers. We can never thank them enough for their service and the sacrifice that you and your soldiers have done for our country.”

“I sincerely thank Aboitiz Equity Ventures for giving protective eyewear to the frontline troops involved in Marawi Operations. These gifts which are designed to protect soldiers’ eyes from flying debris and shrapnel while engaged in combat will not only help save our soldiers’ lives but will also certainly boost their morale.” 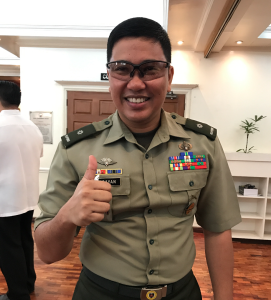 Maj. Francis Rugayan from the Office of the Secretary of National Defense likewise welcome such a valuable present from the Aboitiz Group, especially since the soldiers would have otherwise bought protective eyewear on their own.

“This protective eyewear is very beneficial for the soldiers on the ground. Madalas (More often), we have firefights and explosives and this will protect their eyes. Yung eyes hindi napapalitan (The eyes cannot be replaced). So once it’s damaged, it’s permanently disabling our soldiers, Maj. Rugayan related.

The eyewear is thick enough to protect the eyes from shattered glasses or sharp objects. It’s also very clear that it can be used both day and night during intense fighting.

“The foundation of this undertaking is our concern and love for our valiant soldiers who continue to sacrifice their lives for our freedom and who continuously face threats at sea and on land,” Sec. Lorenzana said.

The Defense chief explained that such donation from the Aboitiz Group demonstrates the strong cooperation and collaboration between the private sector and the government. The Aboitiz Group, including all its business units, has always been supportive of the reforms and programs being implemented by the government to better the lives of the marginalized sector, more so, the Filipino soldiers who selfishly risk their lives for the country and for the safety of the Filipinos.

“I think these projects Secretary are worth building on and expanding as they are in line with our objective of advancing business and communities. So we’re here to support you in our own way,” Sabin Aboitiz said.