UnionBank was once again the hands-down winner of the Best Digital Bank – Philippines award at the Asiamoney Best Bank Awards 2019 held in Singapore last September 25, securing the highly coveted recognition for the third year in a row.

The bank’s three consecutive wins since 2017 were a natural result of its revolutionary digital innovations to remain competitive in the financial services space while simultaneously enhancing customer experience and enabling sustainable financial inclusion.

Its rivals like to say that UnionBank, led by its president and chief executive officer Edwin Bautista, is more talk than action. But the bank can justifiably point to a long list of innovations, eclipsing all other institutions in the country.

Moreover, in its latest edition, Asiamoney identified its 30 financial institutions to watch out for in Asia, and UnionBank is among the five on its radar in the digital banking category.

UnionBank kicked off its digital revolution in 2016, launching among others, EON – the first selfie-banking in Asia that uses facial recognition technology; The ARK – the first fully digital bank branch in the Philippines, Chatbot Rafa – the country’s first banking chatbot and UnionBank Online – an app which allows clients to bank from the comforts of their home or office. In just two years, the bank’s transformation was cited as the best in the region by Euromoney.

Last year, UnionBank shifted to high gear and once more, became the first bank to introduce the first central bank-compliant, two-way virtual currency ATM in the Philippines; first to successfully pilot the use of tokenized fiat in a cross-border transaction from OCBC Bank in Singapore to an account holder in Cantilan rural bank in Surigao del Sur; and the first bank to launch a stablecoin to provide rural banks under its blockchain-powered platform easier access to remittance and payments. 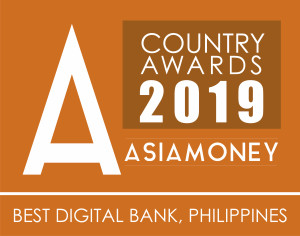 Most recently, the bank reported that its API (application programming interface) developer portal has generated PHP3 billion worth of transactions from both corporate and individual customers only three years since its launch. The API developer portal is the interface between UnionBank’s full set of APIs – or the bank’s various capabilities like bills payment, fund transfers, inquiries, authentication and other functions for public consumption – and their developer stakeholders, particularly fintechs who create new technology to extend financial services to the masses.

UnionBank is seeing clear signs that its digital transformation, expected to be a multi-year process, is working.

We have acquired close to one million customers in 2018, and another half a million customers in the first half of 2019. We have grown our asset base by more than 30 percent to over P700 billion since the start of our transformation journey in 2016. We have also controlled our operating expense growth to less than five percent.

Close to 80% of UnionBank’s interactions with customers are now routed through digital channels.

But what is most remarkable in UnionBank’s digital transformation is the bank’s commitment that “no one gets left behind” in this journey.

The bank is delivering on this promise by investing time and money to retool, upskill, and redeploy its employees.

“We constantly provide UnionBankers opportunities to build new digital capabilities. We encourage internal transfers within UnionBank or in other units of the UnionBank Group. This way, we enable all UnionBankers to take control of their careers and be able to fully own their future,” Bautista said.