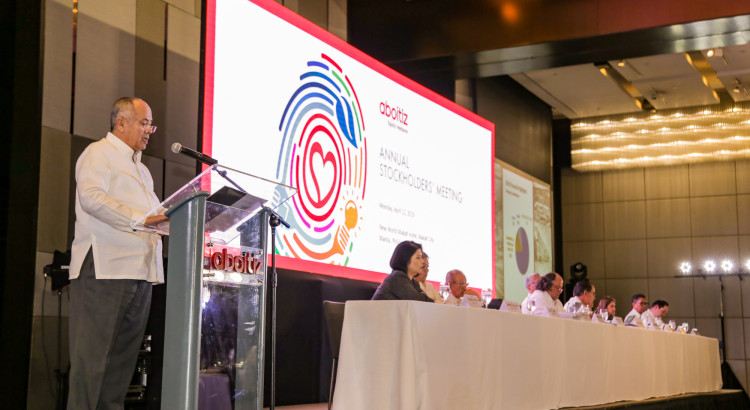 Aboitiz Equity Ventures, Inc. (AEV) has earmarked PHP81 billion in capital expenditures (capex) for 2019, a 65% increase from roughly PHP50 billion utilized in the previous year. The bulk of the fresh funding will be infused into power and infrastructure projects to sustain growth momentum over the long-term.

This information was shared to shareholders on April 22 at both AEV’s and AboitizPower’s Annual Stockholders’ Meetings during President and Chief Executive Officer Erramon I. Aboitiz’s report on the financial and operating results of the two companies for 2018.

For the past year, AEV booked consolidated revenues of PHP187 billion, an increase of 24% from 2017. Power accounted for 73% of the total income contributions from all strategic business units (SBUs). The Banking and Financial Services, Food, Land, and Infrastructure SBUs, respectively, contributed 16%, 7%, 3%, and 1% of total income during 2018.

Our economy continues to grow at a healthy rate and that’s great for us Filipinos as well as all of us in business who are supplying the different consumers in the Philippines. Competition is fierce but we are still very pleased to see the pie getting bigger for all of us. We continue to invest in all of our businesses and our projected capex for 2019 as a group is PHP81 billion, which is the largest that we’ve had so far.

AboitizPower’s capex is set at PHP51 billion, about 80% of which is for baseload projects — mainly for the construction of GNPower Dinginin Power Plants — while the balance is allocated for exploratory and operating activities. AboitizPower believes that it is well-positioned to take advantage of opportunities arising from developments in the power industry.

Aboitiz InfraCapital is allotting PHP16 billion in capex, reflecting the group’s recent infrastructure-related investments and initiatives. A huge chunk of its capex is for the construction of Apo Agua’s Bulk Water Project facilities in Davao City. Aboitiz InfraCapital remains committed to participating in the Philippine infrastructure space and contributing to the nation’s development. Republic Cement has also been investing in capacity expansion and debottlenecking effort.

Pilmico Foods Corporation has earmarked PHP6 billion for various capacity expansions. The acquisition of Gold Coin Management Holdings in 2018 has effectively expanded Pilmico and the Aboitiz Group’s footprint in the ASEAN region and across the Asia-Pacific market. Growth in the coming years is expected to be driven by project developments through capacity expansions and strategic acquisitions.

AboitizLand, for its part, has allocated PHP6 billion for its projects in Lipa City and Pampanga, among other sites, in addition to the expansion of its land bank.

EIA also announced his successors upon his retirement at the end of the year. Current AEV COO Sabin M. Aboitiz will take over as President & CEO while AboitizPower COO Manny Rubio has been selected by the company’s Board to be the next President & CEO. Both leaders will assume their new roles on January 1, 2020.

Over the past 32 years, Sabin has held multiple leadership positions across the Group. We have full confidence that he will lead our organization to an even more successful future. We look forward to a reenergized Aboitiz Group in 2020 under Sabin’s leadership when we celebrate a major milestone in our corporate history, the 100th anniversary of firm Aboitiz & Company.

Throughout all these achievements, the Aboitiz culture remains at the center of an organization poised for to take advantage of a new chapter in its evolving story, determined to achieve our purpose and to deliver on our brand promise to drive change for a better world by advancing business and communities.

Driving a culture of values is what matters most to us. It is how we grow our businesses and how we improve lives in our communities. Our values have molded us into who we are today, and these will continue to drive the Aboitiz Group well into the next century.

Read the AEV-AP 2018 integrated annual report by clicking the link below: 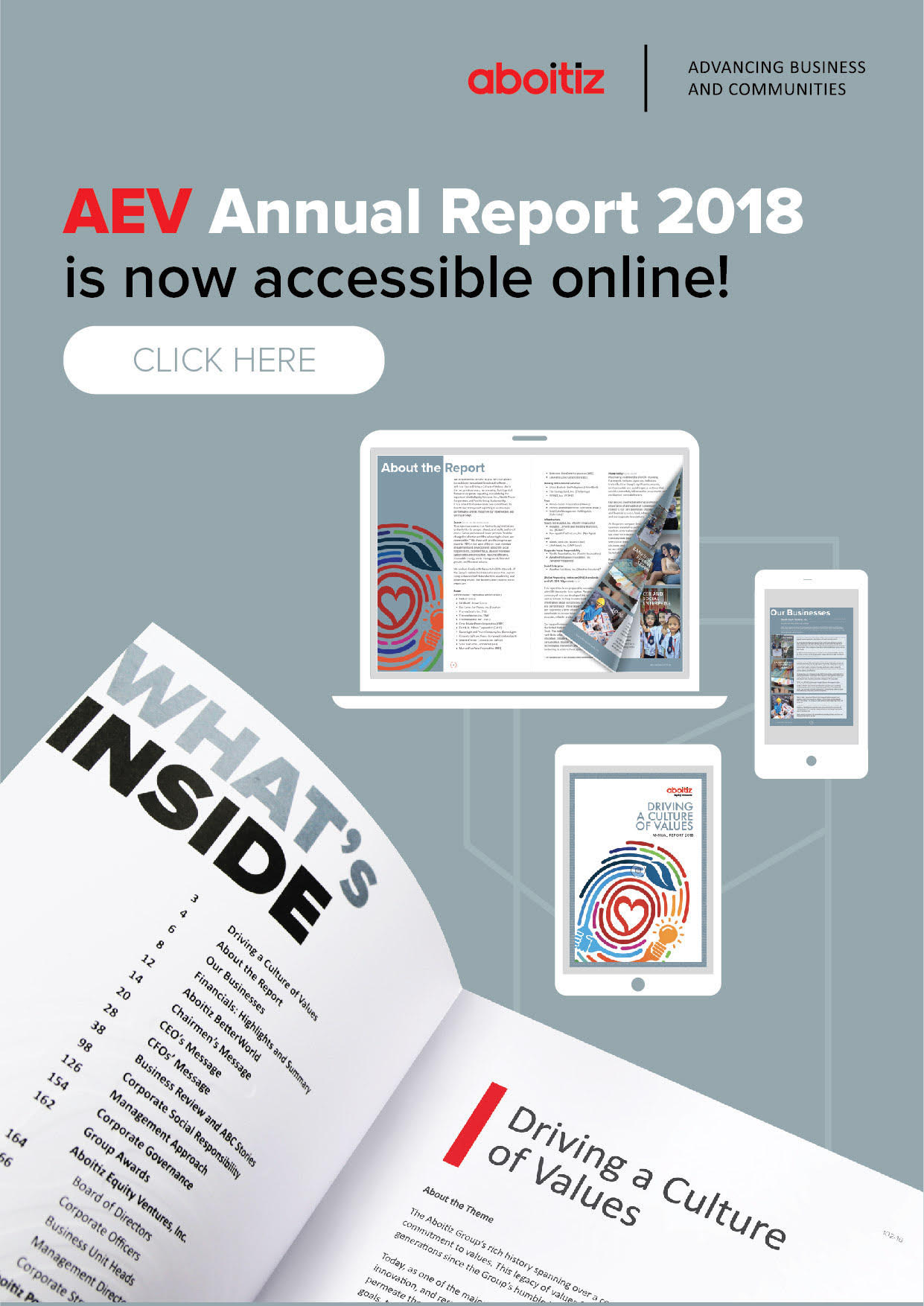